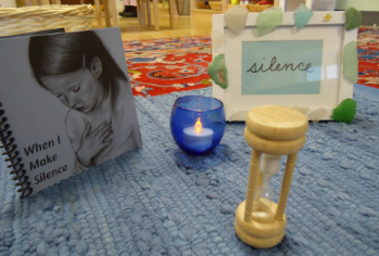 The Montessori Silence Game really is a gem! The children enjoy the peaceful nature of the game and love to try to improve on their previous attempts. But the Silence Game takes a lot of preparation - it's generally not a game that you play until the classroom has normalized.

In order to prepare for this game you need to take time each day to speak with the children quietly. You need to bring the idea of 'quiet' to their consciousness and then give them an opportunity to become quiet.  If they respond in a loud voice, simply make your voice quieter. Keep making your voice quieter until the light bulb goes off and the child has that 'aha' moment.  You must show them how to be still and listen to the silence.

You must also allow them to gain an internal understanding of how their own movements and their own voice can make or break the silence. It is only then that they will  learn to control their movements and voice and understand the impact they have on the world around them. Read how one primary Montessori classroom is shown how to nurture quiet.

"One day I came into class holding in my arms a baby four months old, which I had taken from the arms of its mother in the courtyard.  ... The silence of the little creature struck me, and I wanted the children to share my feeling.  ... To my amazement I saw an extraordinary tension in the children who watched me. It seemed as though they were hanging on my lips, and felt deeply all I was saying.  "Then its breathing," I went on, "how soft it is. None of you could breathe as it does, without making a sound..." The children, surprised and motionless, held their breath. In that moment there was an extraordinary silence; the tick of the clock, which generally could not be heard, became perceptible. It seemed as if the baby had brought with it an atmosphere of silence such as does not exist in ordinary life. This was because no one was making the smallest movement. And from this came the wish to listen to the silence, and hence to reproduce it." Maria Montessori  (The Secret of Childhood)

The Silence Game is played in Montessori classrooms to help the children develop a higher level of self-discipline. In turn, this will help to normalize the classroom.

Preparation
All preparation exercises help the child achieve control and the children can then participate in the silence game.

o    Ask a small group of children to sit quietly and see what they can really hear … ask them to listen to rain on the window panes, birds chirping, the snow falling, the sound of nature, and the sound of traffic).

o    Allow the children to experience the silence without you (the teacher) calling forth things for them to be aware of (don't ask them what they smell, hear, or feel, just let them be).

Directions to play The Silence Game

The Importance and the Nature of the Silence Game, 1930 was written by Maria Montessori. You can read it here.