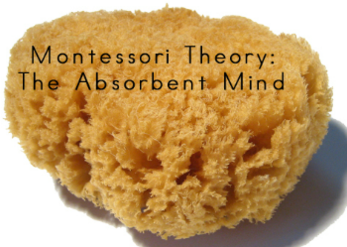 The "absorbent mind" refers to the mind's capacity to take in information and sensations from the world that surrounds it.

Young children are a testament to the mind's awesome ability to absorb. A baby is born without language, and with few skills other than their survival instinct. From birth to three years they use their senses (hands, eyes, ears, nose, and tongue) to soak in everything that surrounds them. The child does this naturally, and without thought or choice. Maria Montessori referred to this period as the 'unconscious creation'.


The information that the child unconsciously absorbs from his surroundings in the early years is used to construct and create himself. Within a few short years a child is walking, talking, and able to feed himself. It is this awesome ability to absorb information that allows children to acquire the language, physical skills (walking, control of his hands), and control over his bodily functions that are necessary for future independence.

The fundamental task of the child during this phase of conscious absorption (3-6 years) is intellectual development and freedom. His mind compels him to sort through, order, and make sense of the information he unconsciously absorbed. It is through this order of his intelligence that the child gains the freedom to move purposely, to concentrate, and to choose his own direction.

"The 'absorbent mind' welcomes everything, puts its hope in everything, accepts poverty equally with wealth, adopts any religion and the prejudices and habits of its countrymen, incarnating all in itself. This is the child!" Maria Montessori